Armed with a Harvard MBA, I learned to write as an 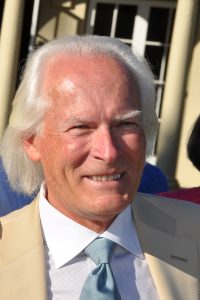 advertising and promotion executive over three brand-building decades in the cola wars (Pepsico Inc.), the beer wars (Anheuser Busch Companies), and the toothpaste wars (Colgate-Palmolive Company).  My true calling came later . . . as founding president of the Ridgefield (CT) Historical Society and a hands-on local historian. Articles about the past were ginned out for the town newspaper. An interactive historical role-playing module was created for our fourth-graders. Graveyard denizens were documented. And a plaque program was launched to identify and preserve scores of historic structures. When the circa 1714 David Scott House spilled its post-and-beam guts to become our Society’s inaugural home, this early American art form inspired my first book: a paean to colloquial domestic architecture.

My passion for the American Revolution led to five years behind musket and sword as a living historian in the re-enacted Fifth Connecticut Regiment of the Continental Line. And another book. This time about citizen soldiers under general Benedict Arnold up against Redcoat professionals in a forgotten, out-of-the-way engagement. Honored by the Connecticut General Assembly for re-staging Arnold’s battlefield heroics in situ, I was later awarded  a second citation for helping mark southwestern Connecticut’s segment of the 680-mile Washington-Rochambeau Revolutionary Route. Next came an association with Richmond, Virginia’s John Marshall Foundation that produced a third book: the definitive account of the future Chief Justice’s youthful exploits as an infantry officer in George Washington’s army. My latest publication—eight years in the works—is the seminal biography of an unfathomably overlooked founding father, immigrant New York lawyer John Laurance. And research is underway on my next book: the shocking story of how America’s first political Party (the Federalists) tried to hijack the Electoral College in the pivotal election of 1800!

After raising a family in our late 18th-century Connecticut farmhouse,
my days are divided between the canyons of Manhattan
and the high Sonoran Desert outside of Tucson, Arizona . . .
with the occasional, necessary trip to Paris.